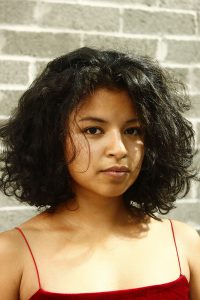 Joana was born in Brazil and grew up in Germany after her adoption. From 2014 – 2018 she studied Modern Dance at Folkwang University of the Arts and is trained in Urban Dance.

After her graduation she was working with The Nature Theater of Oklahoma in Düsseldorfer Schauspielhaus as well as performing in a piece by Johnny Lloyd (Sidi Larbi Cherkaoui) as a Co-Production between Kampnagel and Elbphilharmonie in Hamburg.

Besides that she is part of a female collective of four dancers specialized in Urban and Contemporary Dance who are training and working in Tanzhaus NRW and were invited to develop their work in a residency at pact Zollverein this year.

As a child Joana learned Samba. Few years later she started to practice HipHop, Dancehall, House and Modern. She learned Basics of Kathak while staying in India for one month.